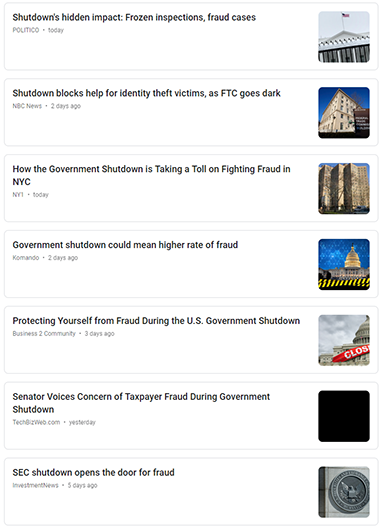 Here’s the opener of a major story from Politico:

For those federal agencies that are shut down, stories like this may lead to a higher rate of fraud, which will be tougher to track down and substantiate because the investigations teams aren’t working even as the memories of witnesses fade.  For local, state, and federal agencies with investigators that are working, it presents a problem as well.  Employees who read about a government shut down may think now is a great time to try and defraud an agency, without realizing that agency wasn’t even impacted.  This could lead to a higher rate of fraud attempts – making it prudent for government investigators of all types to have a heightened level of awareness during the shutdown.

While the shutdown might be an unwelcome source of additional work for up-and-running government agencies, it’s much more than that for the government employees affected, including investigators. For them, it’s the lack of a paycheck which pays for their bills and allows them to support their families.

Taxpayers are getting a raw deal, too.  The news website NY1 quoted a HUD investigator as saying, “The people who are receiving HUD funds are essentially able to kind of get away with more things, they’re not being monitored right now.”

Hopefully, this mess will end soon.

To learn how CMTS can help your agency close cases more efficiently, call us at 855-636-5361 or email us at Team_CMTS@MyCMTS.com.