The numbers on what percentage of companies offer a year-end bonus aren’t clear.  One study pegs the number at 63% of all businesses, while another says it’s only 35% of small businesses.  Regardless, millions of people will be receiving year-end bonuses, and millions of those bonuses will be based on their contributions to the company. 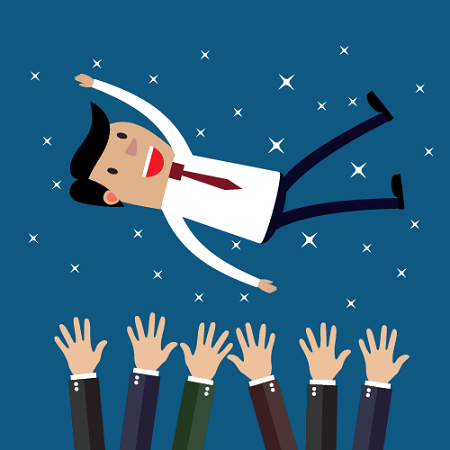 While state laws vary, In the Federal government the most equivalent thing to an annual bonus is the performance-based cash award.  While these types of bonuses are certainly appreciated, and in many cases employees worked hard to contribute to the company in return for those bonuses, they don’t really count as “employee recognition.”  Consider these facts:

True employee recognition is much cheaper than this.  In fact, it can be free – it doesn’t cost anything to send out an email to the team drawing attention to the recent unique contributions of a specific investigator and explaining how that hard work contributed to the team’s success.

It also has less downside: people don’t feel financially cheated if they don’t receive as many paragraphs of recognition as they expected. Finally, the positive effects last for longer, because employees don’t immediately start working towards their next recognition as soon as they receive their most recent email.

Of course, many people would scoff at the idea that an email would engender as much goodwill as a year-end bonus if they were asked.  When asked another way, however, their answers tell us a lot about what truly motivates people.  A 2017 survey by Globoforce asked employees what were the top three reasons that they chose to stay at their current company. The most common response was their job – specifically, that they found their work meaningful.  The second most common response was that they enjoyed the people they worked with.  The third most cited response was compensation.

Government investigative agencies actually have it easier than most employers, in terms of making work meaningful.  Most investigators consider their work extremely meaningful, and fellow citizens certainly respect the work they do in protecting taxpayer dollars.  Work can always be made more meaningful, however, and one way to do it is to recognize them for contributions that made the team more successful, more appreciated or more respected.

So if you’re in the process of issuing cash awards to employees, please don’t stop.  Your employees will no doubt appreciate the extra cash during a particularly expensive time of year.  But don’t let that stop you from suggesting that investigative supervisors at your company really shine the spotlight on those that would appreciate that attention when they deserve it!

To learn how CMTS can help your agency close more investigative cases, call us at 855-636-5361 or email us at Team_CMTS@MyCMTS.com.