The goal of investigators is to make life easier for the vast majority of honest staff in any agency, but people are nervous around them nonetheless. 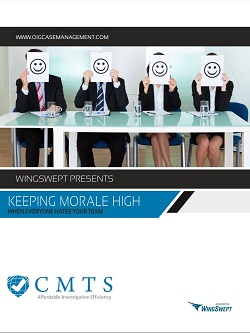 Because your office is charged with investigating the agency you are a part of, you are at best looked at warily by the rest of the agency you oversee. The good actors in your agency don’t want to unwittingly say anything that could lead to an investigation of their behavior or that of a co-worker. Many falsely believe that investigative offices are like an HR ethics enforcement team with a quota to fill – looking for the tiniest infraction so they can file a complaint or start an investigation. While most agency staff don’t hate your team, it can end up feeling that way.

Of course, some agency staff do hate investigators. The bad actors are actively searching for ways to make life worse for investigators or impugn their integrity. If an investigative office does a particularly great job at highlighting fraud and abuse, the reward is sometimes that you’re targeted by agency leaders, or even members of Congress that have their own reasons for wanting waste to go unreported. One week after a well-connected District Attorney was convicted of corruption, Louisiana’s IG office was entirely defunded by the state’s House of Representatives. The Inspector General had to resort to a media effort to regain funding.

Another example of bad behavior: at one agency, an entire order of computers was delivered and promptly disappeared before anyone on the IG team could collect them. Over a month later, they discovered the computers had “accidentally” been taken to the building’s basement instead of the IG office.

Everyone has a motivation to isolate investigators, but the final nail in the coffin is that the investigative team’s behavior often invites this isolation. Even if investigators are welcomed by co-workers into conversations, privacy concerns prevent them from talking much about their jobs. This can lead to awkward or uncomfortable segues during office-talk. The need to maintain a perception of independence and objectivity also precludes investigators from making personal friendships with employees under their oversight.